Rick reviews his past picks: ING Groep, Royal Bank of Canada and SpinMaster | 4:56[/vc_column_text][/vc_column_inner][/vc_row_inner][ultimate_spacer height=”30″][vc_column_text]Click on the links below for Rick’s outlook on select company stocks: 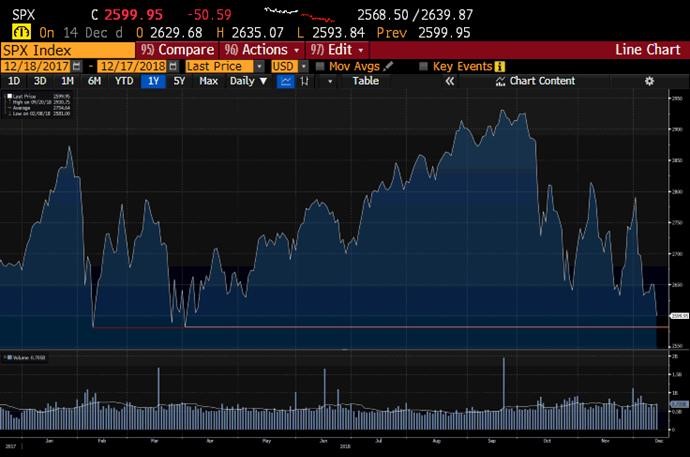 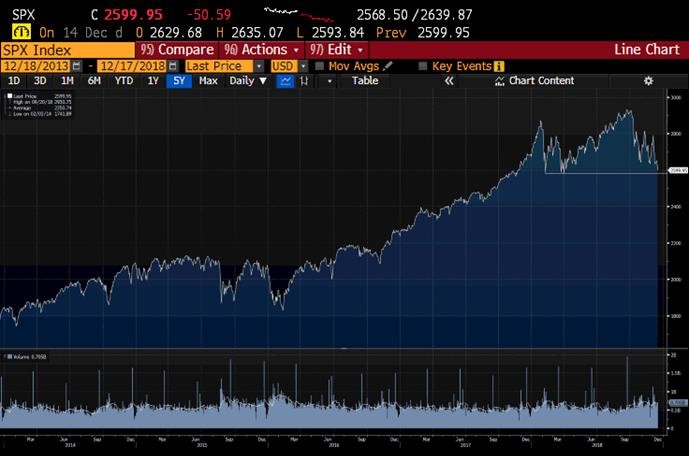 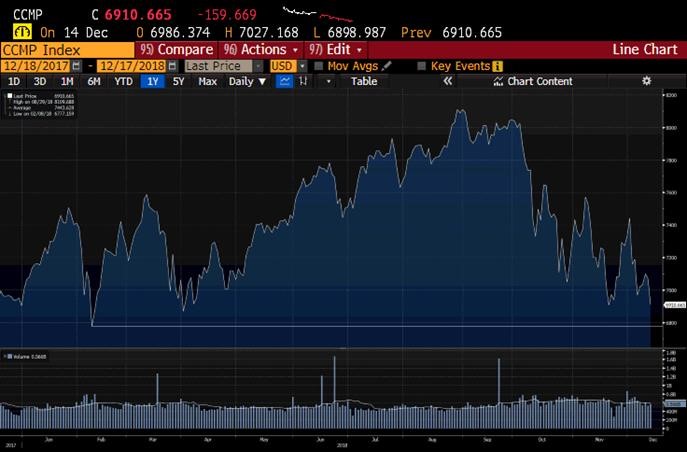 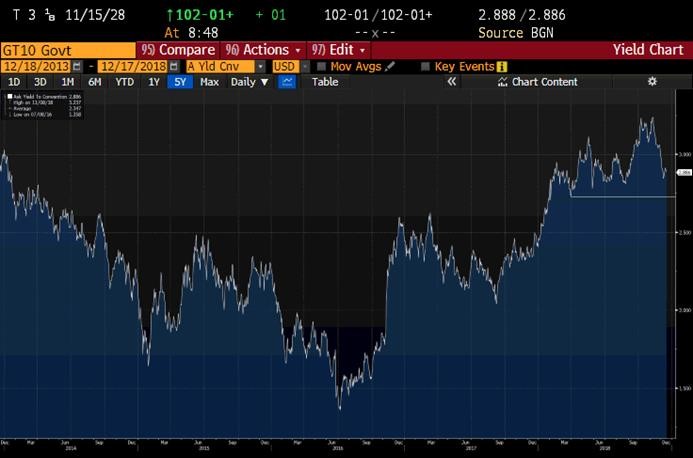 We have been a bit quiet lately, so we thought we would give a minor update.

These markets are certainly making heads spin on a day to day basis.  They haven’t sorted anything out either negatively or positively to assume a real direction, so giving an update is difficult.  The fact that I installed a Trump Tracker app on my Amazon Alexa is a disgraceful sign of the times.

Although the day to day markets are for lack of a better word nonsensical, I think its important to look at a longer term as well as fundamental basis.  Over the last two months we have had multiple 3% market change days both  up and down.  I wish I could say this is not normal, but we did basically go up for two years without these days and that is not normal.  We should level out with a bit more volatility.

This chart shows two things over a longer term- the 11 month correction that began in January of this year is continuing, but importantly, so far these bottoms continue to hold, if they break we will potentially have a bigger problem.  In a positive light, which many have forgotten, we are actually holding a slightly higher bottom than we did in January and we held it twice which reinforces it as a base.  We don’t know if this will be a one year or two year correction, we are almost one year in and the market even broke out to the upside in the summer only to give us a head fake back into a correction.

If the market breaks out to new highs or new lows it will fundamentally change things here, but until then we think this is primarily headlines, not problems in the fundamental economy.

When the market gets like this, it becomes a bit of a passenger ride, and I focus a bit more on what we own, because the market is the market, and our stocks have their own fundamentals.

Here are a few of the November highlights:

Yes we are invested in the stock market and we cant hide from the volatility, but our companies are doing exactly what we pay them to do.  Happy to chat if you have any questions.

The last update we said we didn’t think it was over, even on that rally we thought it was a bit light, but we think we are closing in on the bottom this time.  We are going to re-test this old bottom which is very close and likely the selling will be done after US thanksgiving.  Right now all the leading stocks are under pressure and our cash positions have sat safely on the sidelines. We may begin to deploy a bit of capital if we have a successful bounce off the October lows.

The gap down today, hasn’t had any panic in it, but think a bit more fear and volatility and we will have ashed this out.

The leading stock in the world is arguably Amazon these days and it looks like the leader is attempting to break trend and move higher, this is a vote of confidence.

We will be looking for an intraday reversal in the near future.  Markets aren’t fun, but no surprises here.

He discusses looking to the US markets for where the TSX will go.

Microsoft (Quote, Chart NASDAQ:MSFT) may not be a member of the exclusive FAANG group of tech stocks but there are more than a few reasons to be bullish about the company, says Chris Stuchberry of Wellington-Altus Private Wealth, who thinks that Microsoft’s transition from traditional software company to cloud services giant has been a true success.

The proof is in the pudding, or in this case, Microsoft’s latest quarterly report which beat analysts’ expectations on both earnings and revenue and gave better-than-expected guidance for next quarter’s revenue. Investors honed in on Microsoft’s Commercial Cloud, which includes the commercial versions of Office 365 software, Dynamics 365 business software and its Azure public cloud. That segment took in $6.9 billion over MSFT’s fiscal fourth quarter of 2018, representing 53 per cent year over year growth which itself beat expectations. (All figures in US dollars.)

“We had an incredible year, surpassing $100 billion in revenue as a result of our teams’ relentless focus on customer success and the trust customers are placing in Microsoft,” said Satya Nadella, Microsoft’s CEO in a press release. “Our early investments in the intelligent cloud and intelligent edge are paying off and we will continue to expand our reach in large and growing markets with differentiated innovation.”

Stuchberry says Microsoft is really rolling at the moment. “The investment thesis on Microsoft is very good,” says Stuchberry, portfolio manager at Wellington-Altus, to BNN Bloomberg. “They converted from software to cloud computing and they did a fabulous job of it. The stock price has shown you that.”

Since Nadella took the reins from then CEO Steve Ballmer in 2014, Microsoft’s share price has tripled. In 2018, alone, MSFT has risen more than 24 per cent, while its market capitalization has climbed over the $800-billion mark.

Stuchberry says even though Microsoft’s next act in terms of growth prospects is still unclear, there’s a lot for investors to be positive about.

“I think you’re probably in good shape,” he says. “A big part of that [cloud computing] transformation is behind you, so what’s forward? I don’t have that yet. I think that they could grow some dividends, I think that they could easily do buy-backs, their balance sheet is fabulous. Not a lot of reasons why you wouldn’t buy it, so that’s probably a reason to buy it.”

Rick reviews his past picks: Royal Bank of Canada, Tencent Holdings and Alimentation Couche-Tard | 4:52[/vc_column_text][/vc_column_inner][/vc_row_inner][ultimate_spacer height=”30″][vc_column_text]Click on the links below for Rick’s outlook on select company stocks:

Chris reviews his past picks: Facebook, Alibaba and ING Group | 4:47[/vc_column_text][/vc_column_inner][/vc_row_inner][ultimate_spacer height=”30″][vc_column_text]Click on the links below for Chris’s outlook on select company stocks:

Markets have been really weak in the last few days, here’s what we think is why, and when we may see some relief.

In January, the bond market dropped from a yield of 2.4% to about 3%, and the stock market had a corresponding 10% drop in value, only to recover by June.

Below, you can see the bond market is starting another drop in yield from 3% in September to a little over 3.25% now; this has corresponded to a decline of about 3% in the S&P 500 thus far.

We don’t know how far the bond market will decline, we just know a decline in the bond market is semi permanent where a decline in the stock market may last 3-6 months.  We don’t know where the bottom is in the bonds, so we are not yet ready to do any buying, we think they should go to 3.5% or higher, but no one knows.  We have high cash balances right now, and this was a big part of the plan to survive these kinds of declines.

This is no fun, but this is normal, and we strongly believe we are well positions to thrive on the other side of these declines.

We hope Everyone is enjoying their summer, and we’re hoping it gets a lot better.

As we said back in June, the Nasdaq, the leading market broke out to new highs  little over a month ago.

Looking below- the Nasdaq broke out, to the take a breather and consolidate at old highs, this is incredibly positive market action.

During this technical move we are seeing companies like bank of America make 7bl in net profit and google with fabulous results today pushing the stock to new highs.

Currently the S&P 500 the broad market continues to plug away higher and looks like it will join the Nasdaq on a move to new records.  The S&P 500 has less than a 2% move higher to reach its all time highs- we think it will reach these levels shortly.

If we break through this old high, we think there is a good chance we are going to have another move to all time highs in markets, given this secular bull market is not over, and we don’t know when the moves will occur, this is very positive market action.  It’s been 6 months since the market has moved through record highs.

We are only in the early innings of this quarterly earnings season and it so far things are looking quite good.

Enjoy your summer, things are looking very good here, and we’re available to chat if you have any questions.